NISA’s release of The Legend of Heroes: Trails of Cold Steel 3 for Western gamers on the PS4 has arrived with a bit of controversy. The game originally came out in Japan back in 2017, and it was followed-up with a string of post-launch DLC, including some swimwear options. Well, when the game made its way Westward, one of the DLC packs was left offshore.

Users on the Censored Gaming sub-reddit noticed that one of the DLC outfits for the Western release of Trails of Cold Steel 3 for the PS4, which released on October 22nd, 2019, was missing.

They linked to a video from akutsu24, showcasing Juna’s swimwear, where she’s decked out in a two-piece bikini with alternating rose and strawberry stripes. The rear of the bikini dips kind of low so you can see the top-end of her exposed butt-crack. 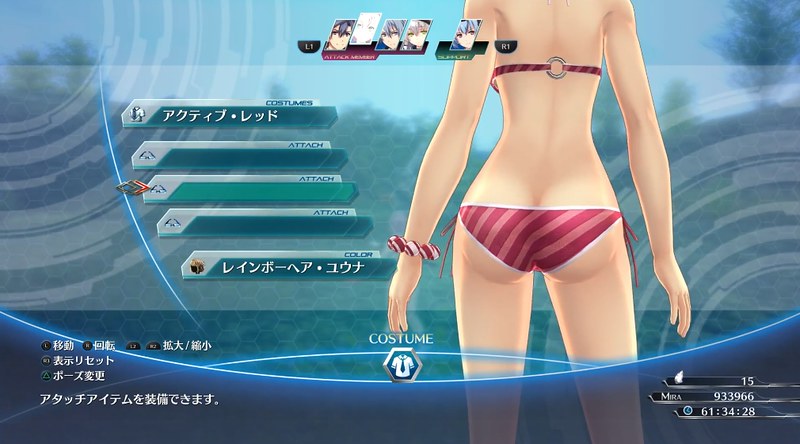 The slender-bodied heroine can don the tantalizing two-piece all throughout the game, including during battle, where certain movements render her susceptible to some slight boob jiggling action.

You can see Juna in action with the bikini and rainbow colored hair via the video below.

It’s quite obvious that this is the sort of fan-service that real fans would pay for.

However, Western gamers are apparently bereft of this glorious fan-service.

“Thanks for reaching out. We are currently aware of the DLC discrepancy between the Japanese/SEA versions of available DLC, and we will be sure to update fans when we have any future news regarding this DLC. We appreciate your patience and support in the meantime.”

Some users have resolved to contact Falcom directly through their support page instead of trying to fish for answers from NISA.

Others are waiting for November 12th to arrive to see if the PlayStation Stores in the West are updated with Juna’s bikini DLC. However, if it hasn’t been added by now it’s unlikely that they’ll add it to the store on a random Tuesday.

(Thanks for the news tip Typr)

9 Titles to be Excited About

How to Play Minecraft Multiplayer on PC, Xbox, and Playstation

How Quantic Dream defended itself against allegations of a ‘toxic culture’

‘The Dark Knight Rises’ Almost Had It’s Own Video Game