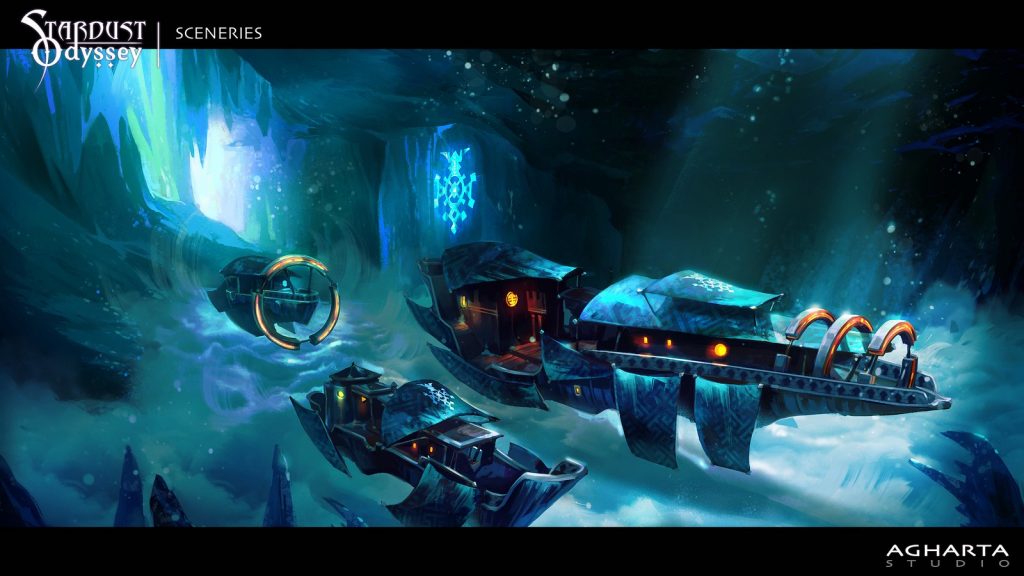 Stardust Odyssey may not be the best-looking game on PSVR, but I would be hard pressed to name a game that looks better. There is no point in putting it off until later in the review. Stardust Odyssey is drop-dead gorgeous.

Everything – from the hub/merchant area that you visit, nestled in a darkened tent on a desert hillside, to the awe-inspiring flying ships built on the back of enormous flying whales – strikes at the player’s heart with daggers of refined, retro-future beauty. There is not one moment in this game that does not feel like eye-candy. Even the fonts are glorious.

It is the hope of VR games across the board to transport players to other worlds. But most VR development companies settle for familiar video game territory – warehouses filled with boxes, haunted mansions, and puzzle-filled laboratories. The makers of Stardust Odyssey struck out in an entirely new direction, and in doing so, achieved a video game world of startling originality.

Playing Stardust Odyssey is like trying to navigate a dream you had as a child after reading a Neil Gaiman graphic novel. The feeling of Stardust’s universe is a mixture of fantasy and science fiction, with just enough dreamy surrealism thrown in to keep it all feeling like the player is existing in an original illustration from a long-lost Jules Verne/H.G. Wells collaboration. I don’t even know what to call it. Romantic Mediteraneanism? Fantastical Aeronautic Desert? Whatever it is, it is refreshing and new.

Stardust Odyssey Is A Stealth Game

Players pilot a ship through an endless convoy of vessels that float forever forward through a transport tube. With one Move Controller, you grip the floating controls of your flying skiff. Movement is incredibly intuitive. Lift up on the controller, your ship goes up. Push forward and your ship speeds up. Pull back and you slow down, letting the flow of traffic creep past you. Moving the controller side to side makes your ship slide horizontally across the flowing field.

All of the ships surrounding yours are floating forward, in motion for eternity. Letting go of your controls will match the pace of those around you, as everyone is pushed together by some invisible force.

Before the release of Stardust Odyssey, the PSVR community spent a lot of time pondering over what sort of gameplay could possibly emerge from this setting. Having played the game, I can safely declare that Stardust Odyssey is a stealth/combat game, but unlike any other you have ever experienced.

The gameplay loop of Stardust Odyssey has you stealing stuff from other vessels. There are several different types of loot, but the process is generally the same. You float up behind an unsuspecting ship (the ones you can steal from are clearly marked) and hold down a button long enough in order for loot to magically transport into your cockpit.

The is an element of gentle exploration to this part of the game, as you swoop and dive among the other ships in the convoy, floating among them in their endless trek. There are hidden objects called “ethers” that you need to open further levels, and seeking them out is key to progression.

Combat In Stardust Odyssey Can Be Overwhelming

Seems easy and breezy, until you encounter some of the sentry bots that float among the ships, patrolling the passage for criminals just like you. If they detect you, they immediately shift into attack mode. It only takes a few hits for your ship to be destroyed, sending you back to the last checkpoint you passed. The sentry bots are generally easy to see, and in true stealth game fashion, they tend to follow simple patterns that you can parse with some patience, allowing you to zip past them at just the right moment.

At times though, the constant motion of your surroundings conspires to surprise you, and you come cresting up over the top of some behemoth ship to find a full cadre of sentries floating right in your face. For these occasions, the game provides the player with a variety of offensive and defensive spells, which can be managed by picking up certain objects in your cockpit with your hook-hands and aiming them appropriately.

All of this is an awful lot to handle by yourself, so Stardust Odyssey offers the ability to play with a friend in the passenger seat. I was unable to get into a multiplayer session (I don’t know anyone else with the game, and there isn’t a readily apparent way to open your game up to randoms). But it would have been very helpful, because by the end of Stardust Odyssey, the difficulty ramps up to the point where things in the cockpit become fairly frantic.

Frustrations Appear In The Later Game

Indeed, if there is one consistent fault in Stardust Odyssey, it is that the controls, while intuitive, become overwhelming. With the steering, the weapons, and all the other levers and meters in the cockpit of your ship, it is easy to obscure the action outside the windshield with your own actions. When things heat up, it becomes much more difficult to tell what is going on, which leads to some frustrating deaths.

Each of the fifteen or so levels is divided up into several smaller sub-levels. These sub-levels are fairly sizable in and of themselves, sometimes taking up to ten or fifteen minutes to traverse, depending on how careful you are. Getting killed sends you back to the last sub-level-defining gateway you passed through, which can be quite a ways back if you get nailed right before passing through a new one. The player’s in-game guide says a few encouraging words, but it is lucky for him that he couldn’t hear my responses.

But regardless of the frustrations, this is a game that should surely be experienced by PSVR players on the lookout for something new. There are tons of original indie games in the PlayStation Store, but much of the true ground-breaking stuff is being done in the PSVR space – and Stardust Odyssey is part of that movement.

While I’m not sure that Stardust Odyssey will ever see a sequel, I would love to see a continued take on this world. A peek into other corners of Stardust in games of other genres would immediately have my attention. Stardust Odyssey’s universe is begging to be explored beyond the borders of this trader convoy, and what has been created here is simply too beautiful to be abandoned.

Stardust Odyssey is currently available in the PlayStation Store.

Mike Johnson From the Bachelor Franchise Has an Android Phone

admin - August 16, 2019
0
Mike Johnson from The Bachelorette and Bachelor in Paradise is a true catch. He is very tall, clearly understands the importance of eyebrows, and...

Hot Topic Weekend, Part 2: Great Deal of the Year on...

Amazon Echo Buds vs. AirPods: Which should you buy?

Pixel 4 XL vs. OnePlus 7T: Which should you buy?

The cheapest dual screen smartphone suffers from one niggling flaw