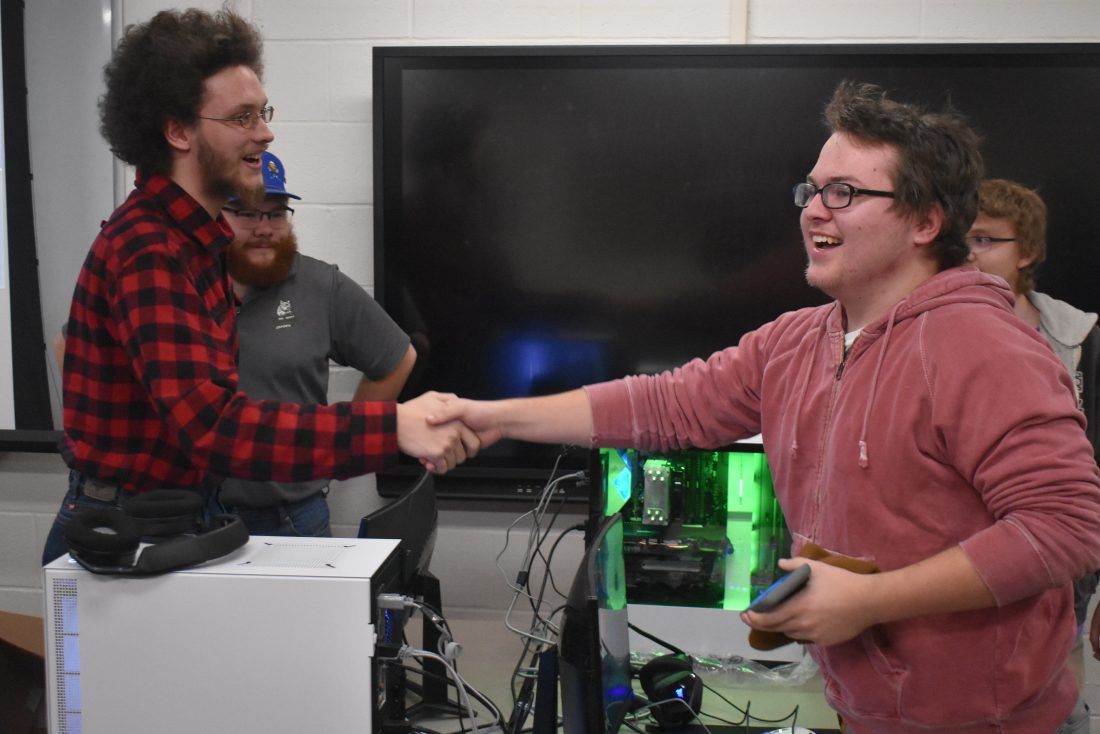 PAUL SMITHS — Stephanie Tyski has a competitive desire that for a long time she could not satiate. She used to play volleyball, but after suffering a serious concussion, sports were a no-go. She spent the rest of her high school career and some of her college years missing that sense of rush and achievement.

“I was devoid of all competitive nature, and I hated it,” she said.

Then she found “Overwatch,” an extremely popular first-person-shooter video game from Blizzard, the same company that made “World of Warcraft.” Though not as physical as volleyball, shooting down other heroes, capturing control points and playing with her teammates brought back a competitive thrill.

“I met some friends who said, ‘Hey, why don’t you try this,’ and it just put me right back into that mindset,” she said. “It’s fantastic.”

Tyski is just one of 70 members of the Paul Smith’s College e-sports team, a group that formed after the college hosted a “Madden ’19” (video football) tournament during this year’s Empire State Winter Games in February. The team is recognized by the Eastern College Athletic Association, among other schools such as Stockton University, Marist College and SUNY Canton. 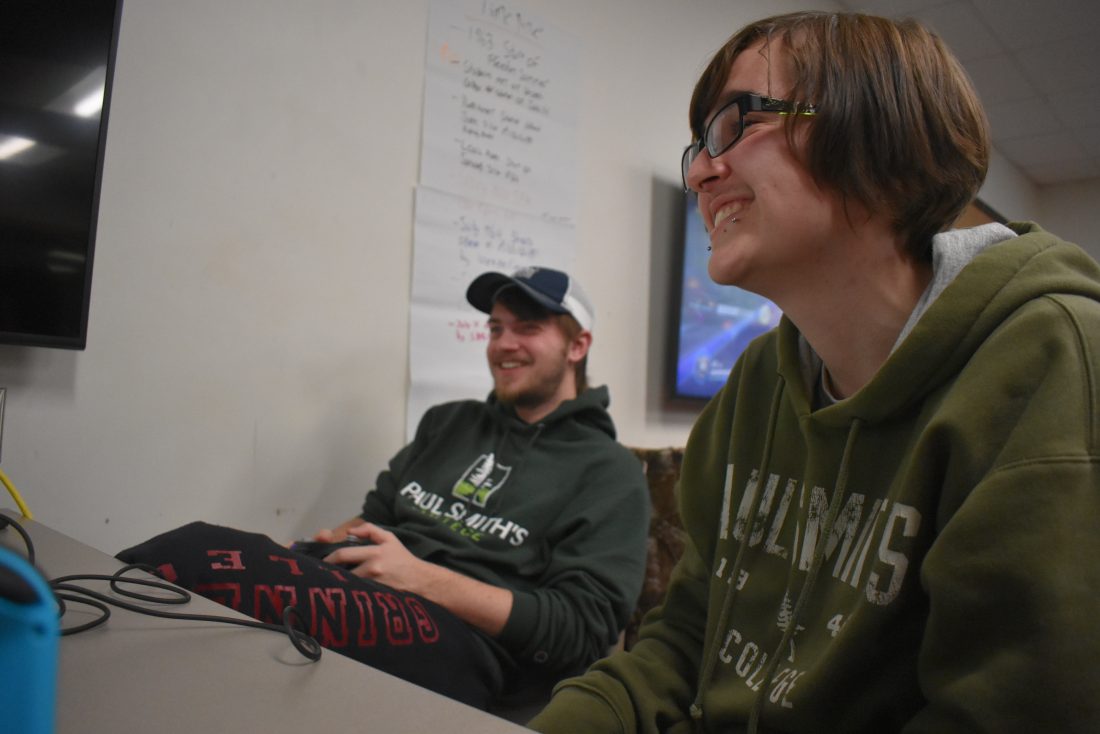 Baseball is often called America’s national pastime. The same goes for e-sports in South Korea. The U.S. may have had its fair share of gaming competitions in the past, especially with arcade cabinets such as “Donkey Kong,” “Pac-Man” and “Street Fighter 2,” but South Korea takes gaming to a whole other level. Stadiums sell out, and gamers are revered as celebrities, sponsored by companies such as Geico, Intel and Snickers. Two of the most popular video games for competition in South Korea are “StarCraft II,” a real-time strategy game, and “League of Legends,” a multi-player online battle arena — imagine board games like “Risk” and “Stratego” but much faster and more chaotic. However, e-sports is growing among Western audiences. Even Shaquille O’Neal owns a piece of the NRG Esports organization.

“In South Korea, particularly, it’s become part of their day-to-day household,” said Matt Bailey, Paul Smith’s College e-sports team coach. “Their Tom Brady is a player called Faker (Lee Sang-hyeok) on the SK Telecom team. It’s growing over there exponentially. We do have people from the West who watch those games. They watch the Korean (League of Legends Championship Series), they watch the Oceanic region, the European region and the North American because it’s all online for them to see.”

The Paul Smith’s e-sports team has roughly 70 members and currently meets in various locations on campus while the school works on building an e-sports lab. In October, Stewart’s Shops and the Dake family, which owns the convenience store chain, donated $100,000 to Paul Smith’s to fund the creation of an on-campus training and competition space for e-sports, featuring state-of-the-art gaming equipment and spectator seating.

“That donation really launched our programs,” Bailey said. “The computer equipment that we need to play was roughly $30,000. We needed more than that to play Nintendo-specific consoles. We need to make sure that they have a space to play in that it has the electrical equipment they need. And even further to that, we need the furniture that makes them successful as well.”

The practice room Wednesday night was split up into three sections: One was for “Overwatch,” another for the Nintendo fighting game “Super Smash Bros. Ultimate,” and the last setup were two computers built in-house for “League of Legends.” Students Alexander Hoppe and William Mason-Hill battered each other as Bowser and Princess Zelda while William Kluge and Daniel Klein shook hands after destroying each other’s turrets and minions. 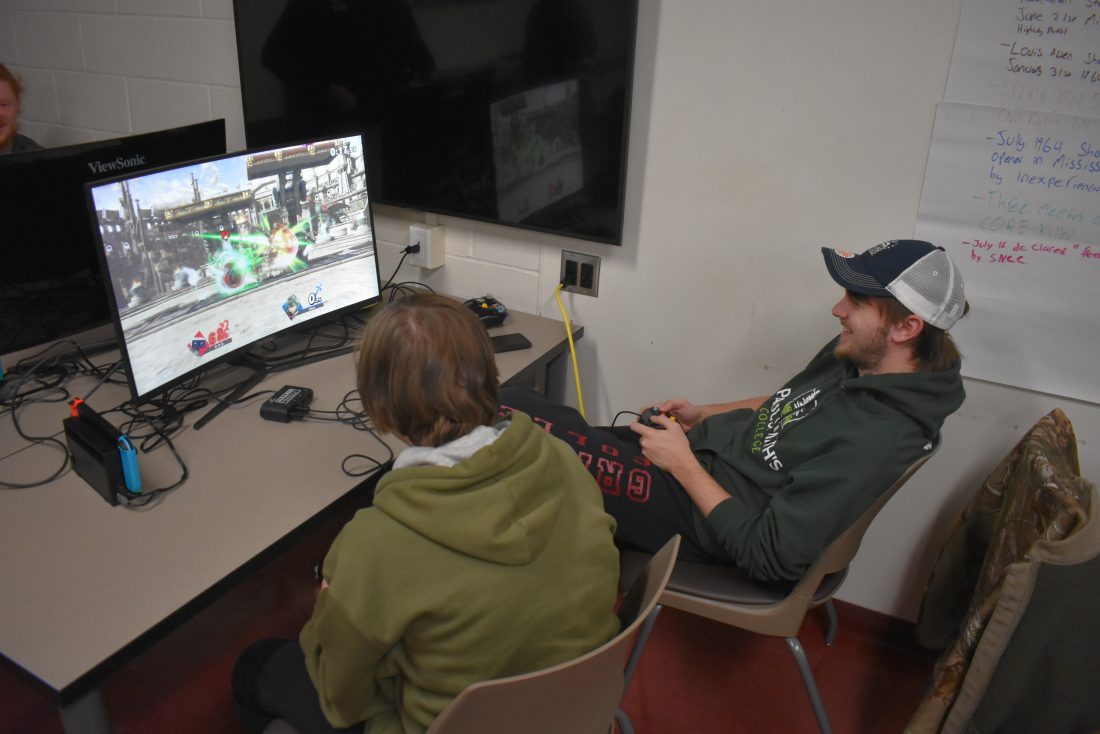 A popular part of e-sports is nicknames. Tyski’s is Sweet T-Rex. Other players, such as freshman Rece Helmich, don’t have nicknames yet.

Helmich is a sponsored “Apex Legends” player, another first-person-shooter. That means he gets paid to play and stream video games by Rogue Energy, an energy drink and powder similar to Mountain Dew’s Game Fuel. Helmich started gaming at a young age and got hooked after playing “Star Fox Adventures” on GameCube, he said.

Helmich said despite having dozens of other teammates, the e-sports team doesn’t feel that large.

“It feels like family,” he said. “Everybody is tight. They stick together and don’t leave each other behind.” 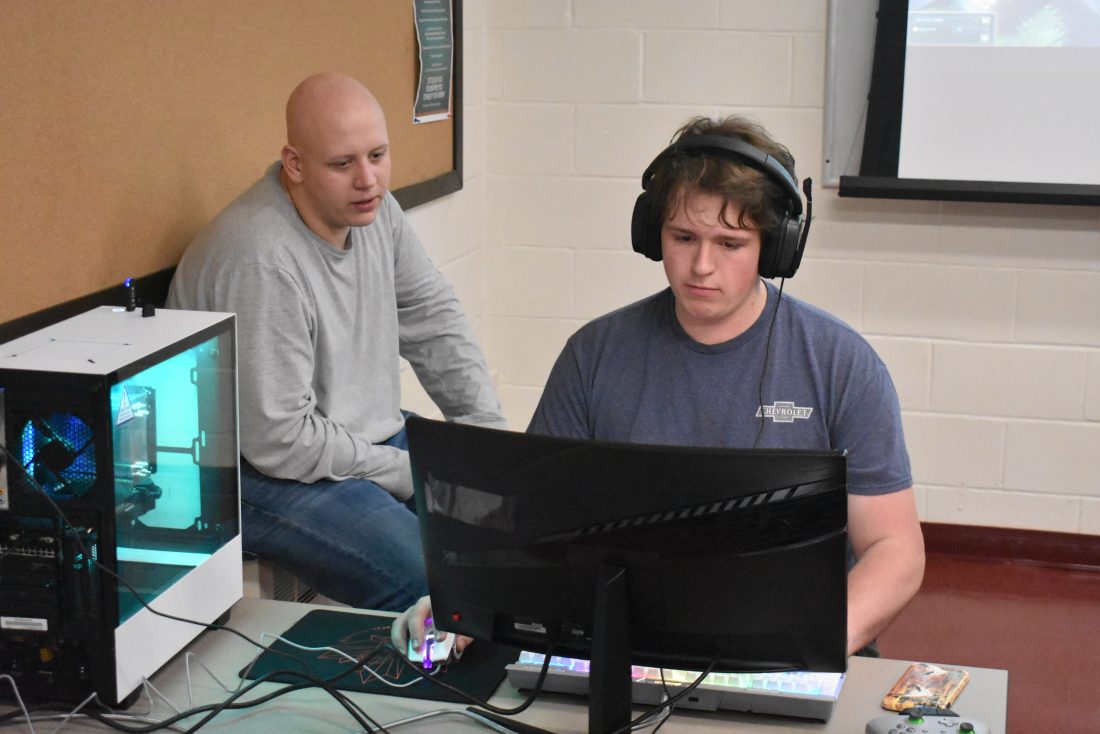 Right now, “Apex Legends” is not recognized by the ECAC, but Bailey is hoping that changes in the future.

“Helmich is sponsored due to his skill,” he said. “He’s widely regarded as a good player, and once ‘Apex Legends’ becomes a sanctioned e-sport by any conference, we’re hoping to launch a team and have him lead them into success.”

Helmich said if the opportunity arose, he would love to be a professional gamer.

“It’s definitely a one-in-a-million chance, but I’m willing to give it that chance,” he said.

The team meets about three times a week and usually practices for two to three hours. Outside of practice, many of the players said they game between two and four hours a day. Bailey said gaming is like any other activity or workout — you need breaks and rest if you want to improve.

E-sports has often been given the stigma of not being a real sport when compared to something like hockey or football. However, because it’s gaining popularity across the globe and is a lucrative industry, that sentiment is changing. At the 2020 Summer Olympics in Tokyo, the games will host exhibition tournaments for “Street Fighter V” and “Rocket League” (like soccer with cars).

“There’s kind of a fine line,” Tyski said. “Some people consider chess a sport, and some people don’t. I’d say I consider e-sports a sport because there’s an intellectual aspect where you really have to use your brain and work with a team. Just like with basketball you have to work with a team. Each sport is different, but just because there might not be an athletic portion to this, I’d still say it’s a sport.”

“There’s such a large community, and so many people play,” Helmich said. “There’s no reason why it can’t be a sport.”

Bailey agreed with Tyski and Helmich, saying e-sports is often misunderstood because of its sedentary nature.

“While they are seated and just playing from a computer, they’re still making a multitude of decisions that you don’t see in traditional sports,” he said. “In ‘League of Legends’ you need to be considering objectives from the first second of the game to the 30-minute mark and constantly adjusting based on what the other team is doing, based on the items you’re buying, based on the abilities your character has, based on the combination of abilities and items your team has. You’re constantly communicating almost to an excessive amount; it would appear so.”

In high school sports, if the players are goofing off or they lose a game, the coach might subject them to extra sprints or push-ups. Bailey said he’s not sure if that coaching style exists in e-sports.

“E-sports has to be handled a little bit more delicately,” he said. “Right now your players are making split decisions every second of the game, so their mental capacity is essentially used up by the end of that. You need to be very careful on how you’re counseling your players. If they made poor decisions, make sure that it’s a learning aspect.”

It’s up in the air whether the National College Athletic Association wants to get involved in e-sports, and Bailey said that’s probably best for the players’ sake since the NCAA doesn’t let athletes get sponsors.

“The NCAA may have trouble establishing a presence in e-sports right now because they have a few political stipulations based on paying players and how schools can advertise themselves,” he said. “We’re finding that students have already achieved sponsorship and are already getting paid to stream the games if they’re very good at them. They’ve been doing this from a young age, so when they transfer to college, the NCAA may need to be prepared to handle that.”

In mainstream Western journalism, reporting on e-sports has been relegated to feature stories about a technical and cultural phenomenon such as this article. Fox’s “Sunday Night League of Legends” might be years away from reality, but will e-sports ever find its way out of the niche story and into the regular sports highlights and play-by-plays? Bailey sure hopes so.

“I think that can definitely happen,” he said. “We’ve already seen in the West and in Montreal there’s plenty of e-sports bars popping up, and there’s shoutcasting (e-sports commentary) at almost every game.”

Is This Apple’s iPhone 9 Smartphone?

The Scariest Thing In P.T. Was Following You All Along

10 Games That Ripped Off Nintendo (And 10 Games Nintendo Ripped...

Airborne adventure ‘The Falconeer’ announced for Xbox One and PC