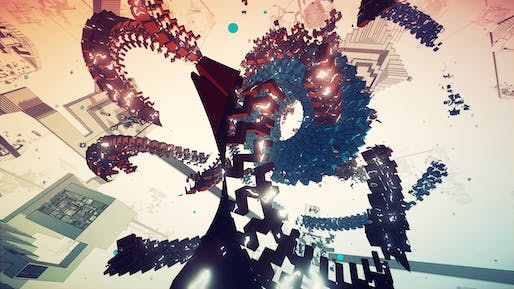 Architecture’s influence in video game design has reached new heights over the years, providing architects and video game designers the ability to blend digital computation, mesmerizing graphics, and unforgettable worlds gamers can explore and get lost within.

Manifold Garden is one such example. The video game is the result of a seven-year effort by its designer William Chyr. This visually tasteful and mesmerizing puzzle game was released on October 18th and explores complex geometries, “unusual physics,” and mind-bending architecture.

Although Chyr doesn’t have a background in architecture, his passion and interest in the field helped him create the geometric worlds in the game. In a press interview with Thomas McMullan of Alphr, Chyr shared, “Ando was the original inspiration. I can’t have curved surfaces in the game – they all have to be 90-degree corners – because you can only fit along six gravity planes. If there was a slanted surface, I wouldn’t know what gravity to put you in, so it would break the mechanics.”

Video games are a great example of various design disciplines blending to create new worlds and where the built environment tells a story. What I find enchanting about Chyr’s work within Manifold Garden is his dedication to using architectural forms as a way to inspire players to explore. Chyr’s hooks players in by inviting them to “learn how gravity works” and how architecture and mechanics allow players to piece together a “new universe,” inhabit the space they are in and “tend to it like a garden.”

To learn more about Chyr and Manifold Garden, click here.

Similar articles on Archinect that may interest you…

The Video Gaming Service for Everyone