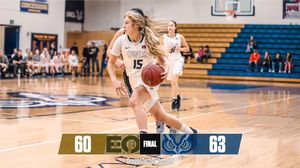 KLAMATH FALLS, Ore. – No. 18 Eastern Oregon (9-5, 3-1 CCC) suffered yet another Cascade Conference loss to Oregon Tech (10-4, 4-0 CCC) 63-60 on Saturday night at Danny Miles Court. The only CCC team currently in the national rankings, Eastern has won 52 of its last 54 conference games since the 2016-17 season, with the Lady Owls dealing them their only losses.

The win marks the ninth in a row for the Owls as well as the third in a row in which the team has come back from a first half deficit to win the game. It also puts the team on top of the Cascade Conference rankings, passing the only other undefeated team – Northwest Christian College – who have only played three conference games as of yet.

“What a great weekend for the Lady Owls!” said OIT Head Coach Scott Meredith. “That was an outstanding, well-coached Eastern team we faced and I’m just so happy for my players to come out on top of such a close game. We seem to get stronger as the game wears on and the 12-3 run to finish the game was the best basketball we have played all year. A big thanks to our fans for the support! Happy holidays to all!”

The Mountaineers rushed out of the gate with a show of strength, going 19-5 as the Lady Owls struggled to keep up, with the quarter ending 19-13 in favor of Eastern Oregon. However, the Owls had begun their comeback already, with a 6-0 run at the end of the first growing to a 17-5 run into the second.

Sophomore Courtney Clemmer tied up the game partway into the stanza on an assist from freshman Eastyn Reeves after a Reeves three-pointer brought the tie within reach. The nationally ranked Mountaineers shot back an 8-2 run, entering the locker room with a four-point advantage, 34-30.

The second half was a tense affair as the underdogs battled for dominance. Tech’s defense picked up in the third, holding Eastern Oregon to only a single basket over a four-minute period as they went 9-for-2 themselves, but the Mountaineers recovered and took a six-point advantage to the break.

But by the fourth, the Lady Owls were on top of their game, shooting at 61.5% and forcing five turnovers as they forced their way to a 3-point lead with only 13 seconds left on the clock. A potentially game-tying long range shot from Megan Still fell just short and it was the Owls celebrating when the final buzzer rang out.

Freshman Maddyson Tull led the Hooters with 12 points, making 5-of-5 to shoot with 100% accuracy on the night. JuniorAmanda Constant and sophomore Kristin Farrell each scored 10, with Farrell making two of Tech’s three long range baskets. Sophomore Melissa Lee scored eight – including six in the fourth quarter run alone – and made eight rebounds and four blocks.

Beverly Slater led the Mountaineers with a double-double effort, scoring a game leading 18 points and 12 boards. Still followed with 10 points, and Taylor Stricklin and Rachel Fielder each added nine points. Stricklin made 3-of-5 from behind the arc and Fielder notched seven rebounds.

Apple AirPods Pro Lite: what we want to see from the rumored true wireless earbuds

Thanksgiving calories easier to consume than to burn off

You can now automate your phone’s settings using the ‘Rules’ feature...

Calm between the storm? Schiff says look out below, Dash, Monero...

NHL 20 review: gameplay, World of Chel upgrades make up for...

Google gifts Maps a new icon and redesigned interface for its...