Huawei, the Chinese smartphone giant, is still battling with the consequences of the trade ban from the U.S. government. Amidst this, the company launched its Mate 30 series smartphones.

Note that the Mate 30 series does not use Google Services Core. In layman terms, it does not come with any of the Google apps preinstalled like YouTube, Google Maps, Play Store, etc.

In spite of the trade ban and non-usage of Google services on its latest flagship, Huawei was able to sell approximately 67 million smartphones in Q3 2019 according to the official report by Huawei.

Moreover, the report also states that Huawei managed to generate CNY 610.8 billion in revenue, which is an increase of 24.4% YoY. Not only this, 228 Fortune Global 500 companies and 58 Fortune Global 100 companies have partnered with Huawei for their digital transformation.

These numbers depict what the Chinese smartphone giant is capable of even after its tussle with one of the major smartphone markets. Not only this Huawei has been maintaining a steady pace in pushing out the latest security as well as firmware updates for its devices.

Recently, Huawei has pushed in the Android 10 based EMUI 10 public beta builds for the Mate 20 family in China. Even the entry level Huawei Mate 20 Lite is also a part of the beta initiative.

And in a recent development, Huawei has expanded its beta recruitment for EMUI 10 (Android 10) in Europe for the Huawei Mate 20 Lite as well as Mate 20 X.

Notably, the update for the Huawei Mate 20 X is available to download via the official Beta Test app of Huawei. You need to head to Personal>> Available Projects and then tap on the latest beta update project Taking a look at the image, it shows that the maximum participant size initially has been set to 400 which will be expanded in the near future. Moreover, the update will bring all the goodies of EMUI 10 for the Huawei Mate 20 X. 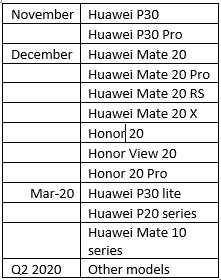 However, with this beta update rollout, the stable Android 10 firmware update will hit the device earlier than expected. Like for Huawei Mate 20X, the initial phase of this beta recruitment is limited to 400 beta testers which will be gradually expanded in the future. You can enroll yourself for Huawei Mate 20 Lite Android 10 beta recruitment on the official Huawei’s Beta test app and follow the same instruction within the app as mentioned above for the Huawei Mate 20 X.

Besides, make sure that you have the latest 9.1.0.245 firmware installed on your Huawei Mate 20 Lite smartphone.

The EMUI 10 packs in some cool new features like new UI, one-touch screen-sharing, dark mode, AOD (Always On Display) etc. Feel free to let us know in the comments below if you were able to successfully enroll yourself in either of the EMUI 10 beta recruitments.

Note: You can check out our dedicated Huawei section to read similar stories surrounding Huawei and Honor smartphones.

admin - November 24, 2019
0
Ever since I began playing FPS games on Xbox One, I’ve used headsets with cords. The Xbox One doesn't support Bluetooth and therefore doesn't support...

You Can Now (Unofficially) Run Android On Nintendo Switch

XRP Could Retrace Before Continuing the Uptrend

Trade-in vs Selling Your Old Smartphone

A crypto startup is recycling old announcements to help prop up...

Opinion: PS5 and Xbox Series X Are Both Backward Compatible, and...