Fnatic has been an Esports mainstay for years, racking up championships and accolades across tons of different video games. However, after years of using the headsets of companies that sponsor it, the organization’s decided to get into the gaming headset market. Enter the Fnatic React, a gaming headset built using the experience of some of the best gamers in the world as a reference.

But is it really Esports-ready, as they say?

Who is the Fnatic React For?

What’s in the box?

The cable extension that comes with this headset is over 6 feet long for some reason.

There’s really not much to the Fnatic React package. In the box, there’s the headset, and its detachable 3.5mm boom mic and 3.5mm audio splitter cable—that’s it. This headset works on just about every platform.

The Fnatic React is an Esports-focused, stripped back gaming headset aimed at providing two things, and just two things: rock solid mic and audio output. There aren’t any bells and whistles or added features to sweeten the pot, so it’s pretty fortunate the headset nails the fundamentals as well as it does (more on that in a bit).

This headset is built on a metal frame, with a mesh cushioned band and leatherette-wrapped memory foam ear pads. It’s comfortable, and while the leatherette could get pretty warm, I never ran into any issues even after a few hours. The memory foam made establishing a decent seal around my ears pretty easy, but the lack of a velour covering option means gamers with glasses will have a harder time.

All told, this feels like a solid piece of hardware—the frame doesn’t creak, the headphones tilt smoothly on their hinges, and the headset feels pretty light on your head. I found the headband had just the right amount of tension to rest securely on my head without feeling too tight.

The Fnatic React is a 3.5mm stereo headset that connects with a single TRRS plug, so it works easily just about everywhere. For PC gamers with separate mic and audio jacks, there’s a two meter long extension adapter, which is frankly far too long, but works well. The small control unit in the cord, which has a volume dial and mic mute switch, is also easy to find and use without looking for it.

The detachable boom microphone sits on a stiff, but flexible wire. I never ran into any issues with clarity over Discord or Skype.

Gaming with the Fnatic React

The headset’s lack of surround sound is less of an issue on console, where that’s less common.

The Fnatic React proved an admirable companion for most of the time I spent gaming with it. On PC, multiplayer games like League of Legends and Dauntless both sounded great.

As I mentioned above, the Fnatic React is an analog stereo headset, so there’s no virtual surround sound available. The headset handles looser directional audio cues of a hunt in Dauntless like a champ. Directional audio still all sounded like it was coming from my right or left ear, but there was enough variance to be useful when tracking down behemoths. However, that’s less than ideal when playing shooters.

Playing multiplayer matches in the recent PC release of Halo: The Master Chief Collection proved a little frustrating occasionally. Normally, FPS games do a pretty decent job covering for stereo sound with ample visual indicators when you’re attacked from behind, but Halo doesn’t do much more than a left or right indicator (aside from the minimap), which makes it all the more noticeable when directional audio comes up short. More than a few times I caught myself wishing for surround sound. This may seem like more criticism of the game than the headset, but you can’t expect every shooter to have a baked-in surround sound setting like Overwatch. If you’re looking for something for competitive gaming, this is something worth considering.

Surround sound isn’t a necessity in any genre of game—it won’t make you better at shooters, but it’s one more piece of information. In every non-shooter game I played, the Fnatic React offered a genuinely great experience, but for an Esports-focused headset it feels odd to leave it out. This isn’t much of a consideration if you’re more of a console gamer. Most gaming headsets for Playstation 4, Xbox One, and Nintendo Switch don’t offer surround sound, so you won’t be at much of a disadvantage while playing games like Fortnite. And again, in games where directional audio is meant to convey atmosphere or tone, rather than competitive information about your surroundings you’re in for a great experience.

How does the Fnatic React sound? There’s a slight de-emphasis in the bass range, but otherwise this headset offers very accurate audio.

The Fnatic React offers remarkably accurate audio output for a gaming headset, with a relative de-emphasis in the bass range below 100Hz, and a slight dip in the very high range. Ultimately there are none of the audio bugbears found in many gaming headsets, like bass boosted to the high heavens, and a significant dip around 4KHz.

In game, this means you won’t have to worry about explosions and gunfire running roughshod over every other sound. Those sounds will probably still be the loudest things in a given moment, but not so loud as to drown out sounds a game’s developers actually want you to hear. The added emphasis in the high range also means that parts of speech that occupy that range, like sibilant sounds (F,S, and SH sounds) will come through loud and clear—these sounds often get dropped in calls, but they’re important for voices to sound natural.

A frequency response like this means music of most genres will sound pretty much like they should. Though music that is more on the electronic side and relies on low bass sounds might sound a bit flat. In Still Feel by Half•Alive, the already understated bass line is very difficult to hear at times. The Fnatic React offers very decent isolation for a gaming headset. There’s nothing approaching ANC here, but the thick memory foam earpads do a great job isolating you from the outside world. You shouldn’t have any issues with the typical noises in the home, like noisy fridges and roommates.

Outside, the headset will fare much worse, but it’s not really meant for that. Gaming headsets are often saved from their relatively poor isolation by targeting the ideal environment (like a living room or bedroom).

How good is the microphone? 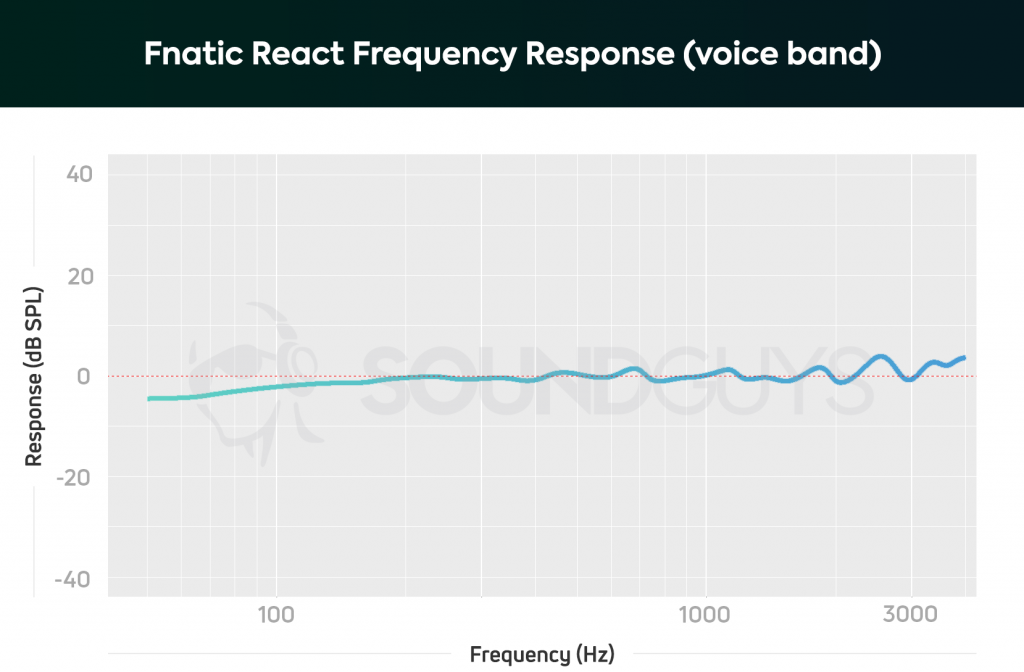 The Fnatic React’s detachable microphone is among the most accurate gaming headset microphones out there. Most gaming headset mics pretty seriously de-emphasize the bass range, which can make people with deeper voices sound pretty distorted. Here, the microphone displays only a slight de-emphasis in the bass range, but not so much that you’ll notice much difference. Listen for yourself:

Should you buy the Fnatic React?

If you’re in the market for something affordable and extra features aren’t that important to you, definitely. 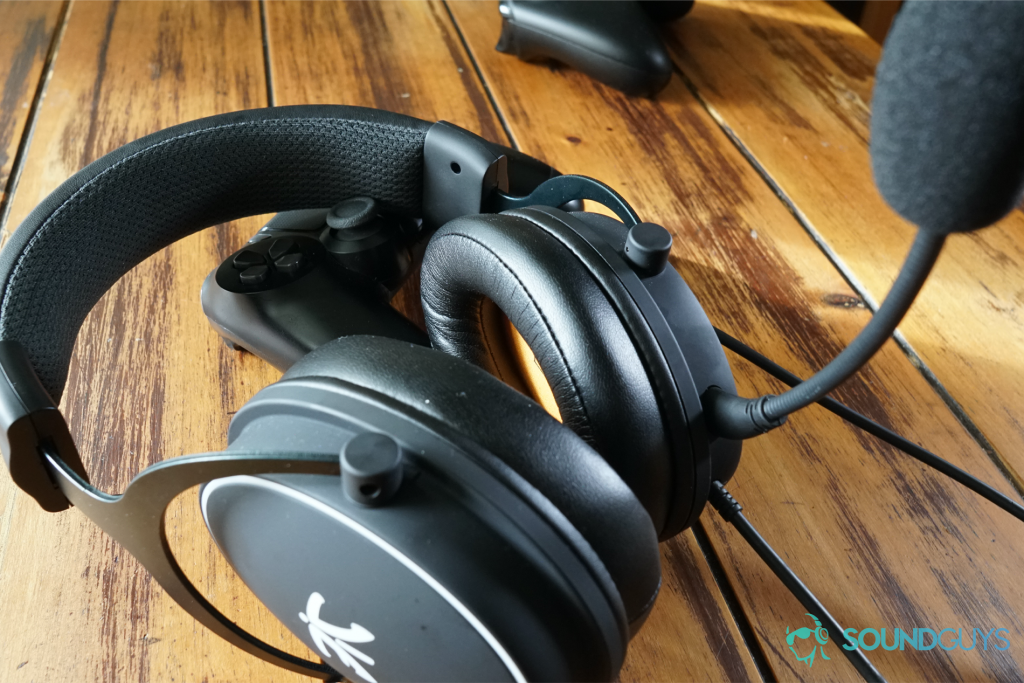 For around $70, it’s hard to do better than the Fnatic React. The lack of surround sound in something geared (or at least marketed) toward competition is a little odd, but ultimately this is a rock-solid stereo gaming headset. The microphone offers clear and accurate call quality. The headphones put out pretty accurate sound, and their pads are thick and very comfortable.

If you’re set on a finding a gaming headset with surround sound, something like the Razer Kraken X is a solid affordable option on PC, and the Playstation Gold Wireless headset is a good option if  you’re focusing on that platform. However, if you all you need is a gaming headset that covers the basics on the cheap, this headset sounds almost as good as perennial favorite the HyperX Cloud Alpha, and it has a far superior microphone.

Disclosure: We may receive affiliate compensation in connection with your purchase of products via links on this page. Even though we may receive compensation, we always give our honest opinions, findings, beliefs, or experiences on each product. See our ethics policy for more details.

Updating Video games On PS4 Is Like Pulling Tooth

Next-Gen SSD Will Really Make a Difference for Open World, Less So for Other Games

The IT refugee from St. Paul has become a board-game industry luminary

no one cares about exact count

10 Kitchen Gadgets Put to the Test

Apple Card: Everyone can apply now

Honda returning to the Nurburgring with hardcore Type R

Better Call Saul: When it airs, how to watch, and everything...

How to watch the Love Island 2020 Final online: stream from...