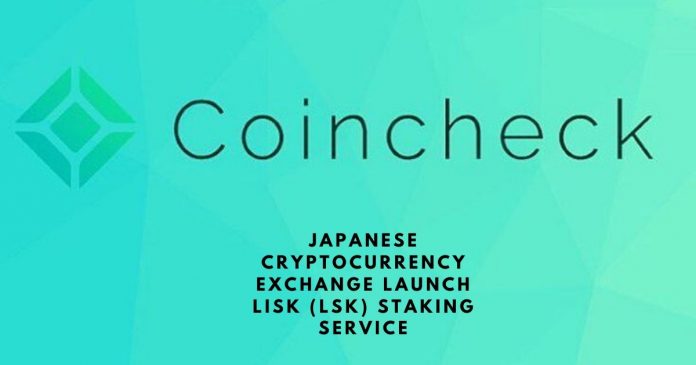 Coincheck made the announcement via its Twitter handle. Thus, becoming the first Japanese cryptocurrency exchange to offer staking services. As well as the world’s first Lisk exchange staking service.

The company noted that the staking service provides new value. Users reportedly will get more assets just by owning cryptocurrencies. Also, they’ll contribute to the development of blockchain networks.

According to reports, the launch of the staking service is part of a testing phase. However, the exchange has already promised to share the rewards earned from it with the users. Specifically, those that hold Lisk (LSK) tokens in their accounts. The amount of the rewards will be based on the volume of assets owned.

Besides, the users will be able to operate on the Lisk network powered by the DPoS consensus algorithm.

Also, Coincheck will use a part of its holdings to vote for the delegates, i.e. a person who creates and authorizes blocks on the Lisk network. Should a chosen delegate end up among the top 101, the firm will receive a portion of the reward assigned for the delegates. Subsequently, it’ll distribute it among them (every Wednesday).

Besides, the exchange revealed the eligibility requirements concerning the staking service. Thus, the investors have to hold at least 10 LSK on a daily basis in their Coincheck account. Besides, to participate, they can’t move these funds during the staking period.

Coincheck is headquartered in Tokyo. The exchange claims to be a leading Bitcoin wallet and exchange service provider.

The Lisk (LSK) cryptocurrency started operating in early 2016, and it’s headquartered in Zug, Switzerland. Max Kordek and Oliver Beddows founded the cryptocurrency; its mission is to make blockchain technology more accessible to the masses.

Lisk also claims to enable developers to create and distribute. As well as manage decentralized blockchain applications by deploying their sidechain linked to the Lisk network, including a custom token.

Ethereum may see intense rally after piercing this technical resistance

The Importance of Consumer Awareness in the Cryptocurrency Industry

Google works on a certification program for Android gaming smartphones

Senate Passes Legislation to Finally Crack Down on Robocallers

Meet Gonggong, the first major body in the solar system with...