In ‘Destiny 2,’ players can spot a future version of LunaH-Map, to be launched in 2021, on the moon’s surface 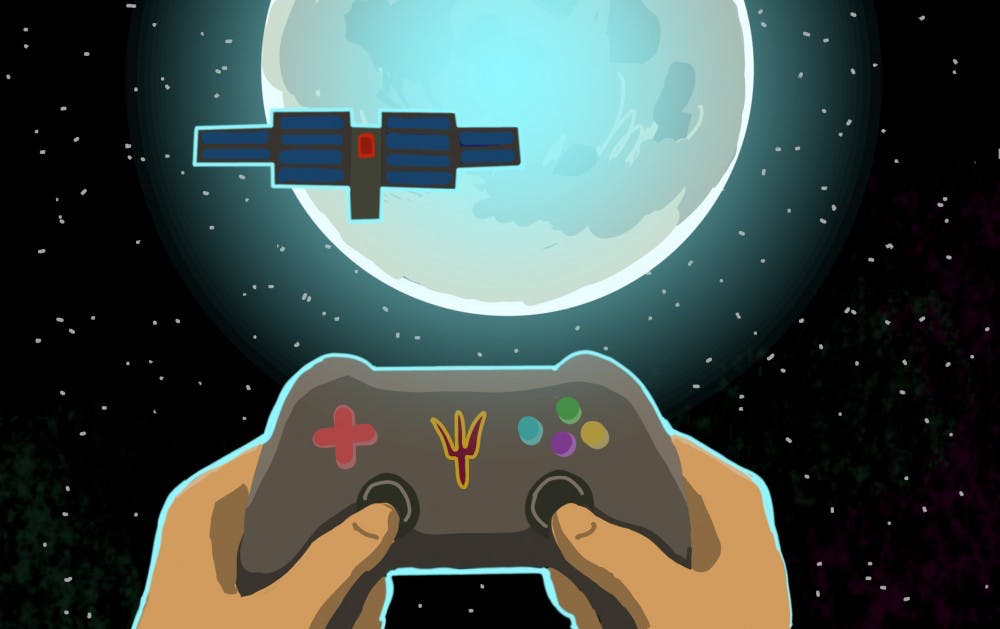 “Destiny 2″ is the continuation of a science fiction video game series produced by the company Bungie. ” Illustration published on Thursday, Oct. 17, 2019.

By Grace Lieberman |
40 minutes ago

A project at the School of Earth and Space Exploration (SESE) is looking toward the future in more ways than one.

The Lunar Polar Hydrogen Mapper, LunaH-Map, is not only the second satellite of its kind to be launched into space, but its future self also makes an appearance in the video game “Destiny 2: Shadowkeep.”

“Destiny 2” is the continuation of a science fiction video game series produced by the company Bungie. Players can fight through a campaign mode to protect the last remaining safe city for humanity from extraterrestrial attackers, or play an online player versus player game.

Bungie, along with other developers, includes subtle references within their games called Easter eggs. The LunaH-Map is among a number of other Easter eggs in “Destiny 2.”

The principle investigator for the LunaH-Map mission and an assistant professor at the SESE, Craig Hardgrove, said this collaboration came from his history of consulting with Bungie developers over the past decade.

Hardgrove said he is a longtime fan of the Bungie game “Marathon,” and he remade several songs from the game while in college. Hardgrove said developers reached out around 10 years ago about using those songs for an iOS version of “Marathon.”

“I had to talk to them and they asked me what I did for a living,” Hardgrove said. “I told them I worked on the Mars rover, which is what I did at the time, and they’re all huge space geeks at Bungie.”

Hardgrove said that from there he gave a talk to Bungie employees about Mars and the rover project, and he consulted with designers about how Mars looks for the first Destiny. The LunaH-Map project was approved after this, which lead to its appearance in the game’s sequel.

LunaH-Map’s mission is to study the presence of water in the “permanently shadowed regions” of Earth’s moon that are among the coldest places in the universe.

“We know that there’s enrichments of water ice at the moon’s poles, but we’re a little unsure about exactly how much there is and where it is,” Hardgrove said.

Hardgrove said that understanding where this ice is located can be applied to new endeavors too.

“It will also help plan future human exploration of the moon either with rovers or with human astronauts landing at the surface so that they know where to go look for water, which is a great resource for using as fuel or potentially drinking water,” Hardgrove said.

LunaH-Map will be launched in 2021 and orbit the moon for two months before running out of fuel and falling onto the moon’s surface. The game features the spacecraft years after its mission is complete, still lying on the moon where it crashed.

Matthew Kling, a junior studying management in the W.P. Carey School of Business, said he has played hundreds of hours of “Destiny 2” and it’s one of his favorite games.

“Me and my friends have been playing it since the first one came out in 2014,” Kling said.

Kling said that the game’s cosmic aspects combined with the classic first-person shooter model is what makes his gaming experience with Destiny 2 entertaining.

“It’s a very strong sci-fi aspect, there’s always stuff to do exploring the different planets and other celestial bodies,” Kling said. “A big thing I personally like with the game is that there’s a lot of space exploration and then you know, aliens and whatnot.”

Hardgrove said he’s excited to see the satellite in the game, but between work and being a father, finding the time to level up is difficult.

He said he has yet to reach a high enough level to be able to see the digital form of his creation.

Qualcomm’s new Snapdragon X60 5G modem has an audience of one:...