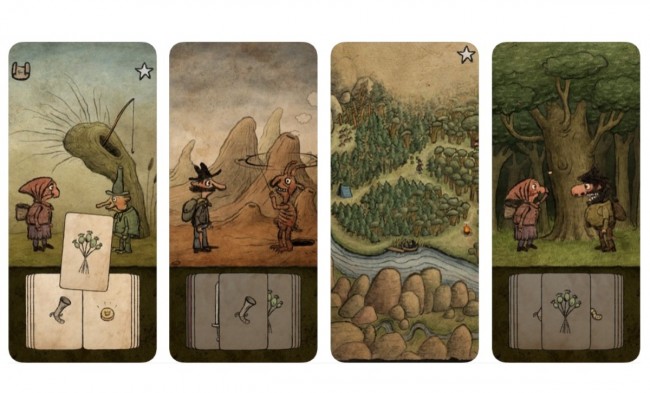 Apple continues to expand its roster of games for the Apple Arcade with the addition of four new titles, including the surprise release of Pilgrims.

When the iPhone maker announced its new online gaming service, it promised fans a large collection of video games that they could choose from. For a monthly subscription fee of only $4.99, users can play more than 100 new and exclusive titles across their Apple devices.

Some of the games featured in the Apple Arcade reveal included The Enchanted World, Where Cards Fall, and Shinsekai: Into the Depths.

Now that Apple has already released its major iOS 13 updates across its platforms, Apple Arcade should be available to most of the mentioned devices. To access the service, users can go to the App Store on their devices and open the joystick icon found at the bottom of the screen.

Here are four of the latest video games that just made their way to Apple’s gaming service:

Pilgrims is a “playful” adventure game developed by Amanita Design, the same game studio that created Samorost and Machinarium. It allows players to roam the game’s open world and explore it anyway they like. Here they can meet fellow travelers, whom they can help out in completing their story quests.

In the game’s official Apple Arcade page, Amanita Design encourages gamers to play and enjoy the title and not simply beat it. They can take on various tasks using a wide array of items and with the help of unique characters without being required to follow a linear path.

Pilgrims also features 45 different achievements, which adds to the title’s replayability. These accomplishments are distributed all throughout the game, and players need to discover each one before they can collect them.

At first glance, the game looks and feels fantastic because of its unique animations and custom sound effects. The handcrafted graphics are reminiscent of illustrations found in classic fairy tale books such as the works of the Brothers Grimm. They help enhance Pilgrims‘ storybook appeal.

Aside from the Apple Arcade, Pilgrims is also available for PCs.

The Bradwell Conspiracy is a first-person puzzle-solving video game from Bossa Studios. Unlike other entries in the genre, the title incorporates much of its storytelling elements into the challenges that gamers need to overcome.

Players take on the role of a survivor of an explosion at a Stonehenge Museum fundraising event. They need to make their way out of an underground complex with the help of a fellow attendee, who is also trapped in another part of the building.

What makes it different from other puzzle-solvers is the use of a photographic messaging system. Gamers have to take photos of their surroundings and send them to the second survivor so they could help make sense of where they are in the underground complex.

As the game title suggests, there’s also an elaborate conspiracy in play that promises to keep gamers at the edge of their seats as they progress through the story.

The Bradwell Conspiracy came out slightly earlier than its expected Oct. 8 Apple Arcade release. It will still debut on other gaming platforms in the following days.

Developed by 34BigThings, RedOut: Space Assault is a fast-paced, space combat game designed for hardcore fans of aerial dogfights. The game puts players in the cockpit of a Super Orbital Recon Fighter, with the goal of taking down all rebels and pirates wreaking havoc in outer space.

Whenever players complete missions, they are rewarded with Cards and Tokens that could be used to upgrade their fighter’s hull, shields, energy weapons, and missiles. Once they become strong enough, they will be able to take on the larger and more powerful Capital Ships.

RedOut: Space Assault is also heading to PCs, but there’s still no word yet on when it will be available on Steam.

Nightmare Farm is a farm-management game from Hit-Point Co. Not much is known about the title other than what the game developers mentioned in the Apple Arcade page. They described it as “story of a painful nightmare spinning in a bright world.”

Based on screenshots of the game, it appears players will take on the role of a girl left in charge of a creepy-looking farm. The description mentions something about meeting “unique” friends and being “touched by their kindness,” which could mean that players will be given several tasks that they need to accomplish for NPCs.

Nightmare Farm is as mysterious a video game as they come.

5 Upcoming Videogames That Have Been Delayed

Alok & Dynoro Unveil Video Game-Like Visuals for ‘On & On’

Shack Chat: What game have you played the most?

admin - August 10, 2019
0
HTC, the Taiwanese electronic tablets and Smartphone producer, says its blockchain-controlled Smartphone, the Exodus, will support LTC. Moreover, HTC has plans to launch a...

Dark mode is finally rolling out to the Google Podcasts app

Huawei may be given another two-week reprieve by the US

Apple has an idea for immersive audio technology that could one...

The Most Powerful and Advanced Smartphones iPhone 11 Pro and iPhone...

Bitcoin Starts Recovery; Gets Back to its Old Fort around $10,200

Why Did the Winklevoss Twins Go All In On Bitcoin?